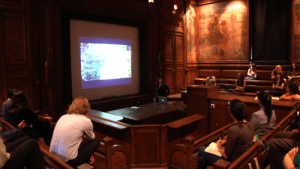 Where:  Benoit Hické, who made this event possible in the beautiful auditorium of the Galeries d’Anatomie comparée et de Paléonthologie, told us that the Museum was built on an ancient river called the Bièvre, which etymologically, derives from the word ‘beaver’ :

To begin with, the audience was offered a seance of semiology from video images shared by Christy Gast and Laura Ogden, opening in Karunkinka. From this, a series of words, concepts or actors were excerpted and written down on sheets of white paper: 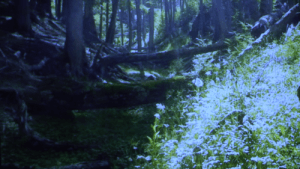 – the hunter, the locals, the beavers, the fallen trees, the philosophy, the useless work, the scientists, the state, the artist, the water, and so on.

After that, we were all invited to participate in a “Family constellation exercise”, a role-playing game of sorts,The replica of a beaver attributed a role to each member of the audience, in turn creating their own representation of constellations.

Each participant was afterwards free to move into another group, to which they though they were closer.

This exercise triggered reflexions, thoughts and discussions on the place of each individual in a global environment. How to think about interconnections or chains of causes and consequences, that make each ecological issue such a complex puzzle? 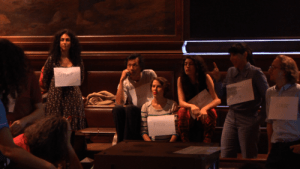 We heard different views from the participants on how they perceive themselves in the global environment among beavers and forests: some tried to hear, to feel or to experiment with the position of the animal, others emphasized the difference in positions.

We heard for instance that “beavers taste like the wood they eat”.

Other conceptions were more anthropomorphic, perceiving beavers as sculptors, or engineers, whilst envisioning their family, their work, their land.

To conclude this work week session and in an attempt to define the highlights of this collaborative project between artists and scientists, let us (re)consider the following points :

1- Everyone must leave their comfort zone to enhance the exercise of “looking at things differently”.

2- A connection or parallel is discernible between the global ecological situation and the history of colonialism ; these are two entry points from which to understand the current research in post-human geography.

3- And finally, what everyone, no matter from what specific field, can share, is an ability to feel intimately attached to an environment – be it the entire landscape or its components – we can all be touched by a certain wonder, from which can emerge a sense, whether poetic or scientific; we just use different ways to do so.