Fortunes of the Forest: Divination, Dance, and Story was a livestreamed, participatory performance incorporating plant knowledge through ritual, movement and conversation. The event took place on August 18, 2020 as part of the digital residency “Ensayos: Passages” in celebration of the launch of our online periodical Más allá del fin / Beyond the End, issue #3.5. 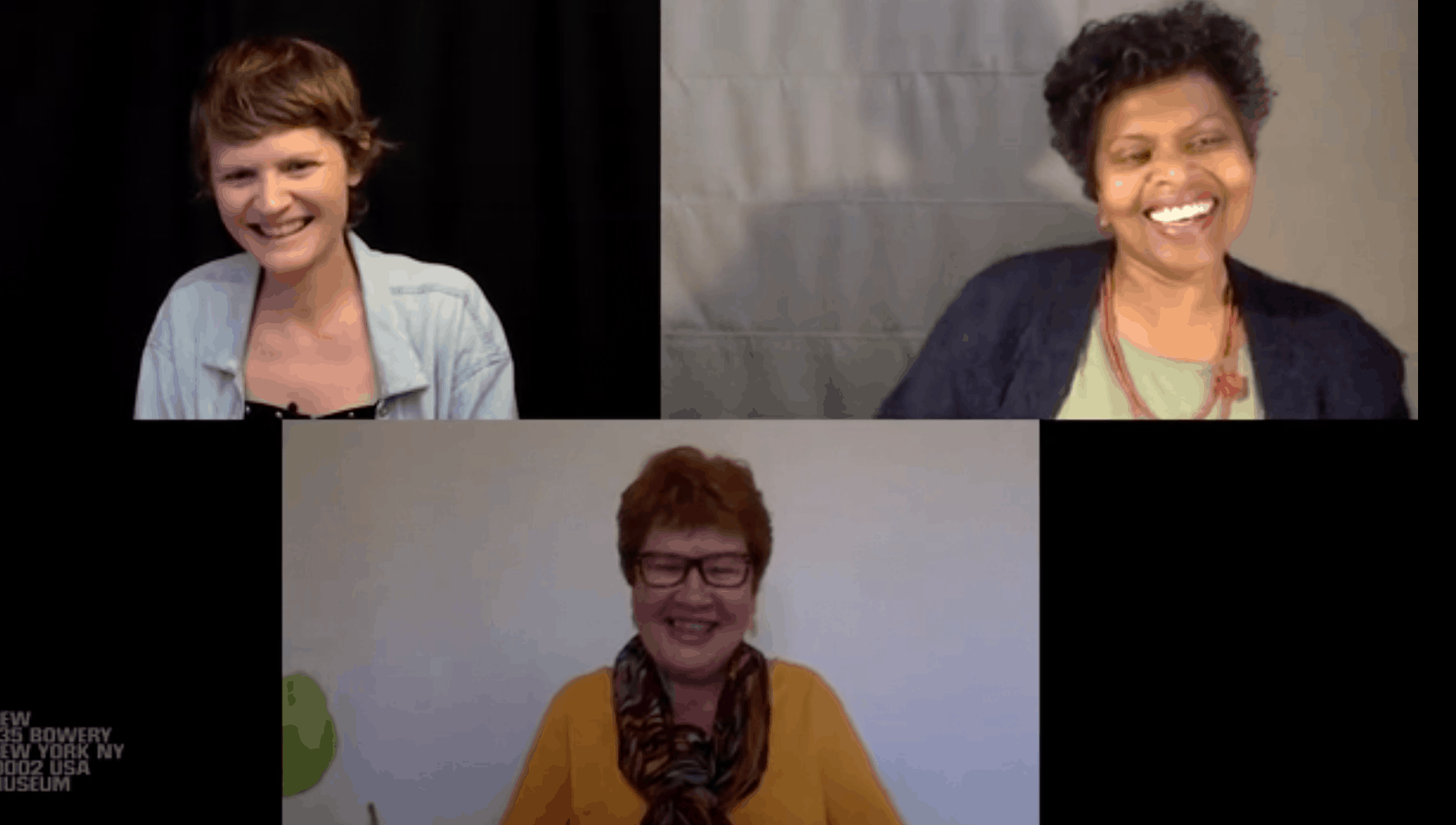 For Fortunes of the Forest, Australian Ensayos collaborators Dr. C.F. Black (Christine), Amaara Raheem, and Caitlin Franzmann came together to offer unique perspectives on plant consciousness.  As an Indigenous legal scholar and intellectual explorer, Christine’s ancestry, research and travel have shaped her understanding of how to interact with plant beings and other beings on the Earth in a lawful manner. Christine spoke of a deep knowledge about the microscopic and galactic that Australian Aboriginals gained from intimately knowing a place and its shifting structures.  Dance artist, Amaara Raheem, invited the audience to be seen and to move together in a guided hand movement score –  a ritual to acknowledge the collective and to begin aligning with the plants in the Fortunes of the Forest deck.

Caitlin Franzmann created Fortunes of the Forest with collaborator Man Cheung’s botanical photographs of plants found in Karawatha, an urban forest in Australia. One of a number of decks and guidebooks Franzmann has created, this deck prompts associations with living entities, with whom humans share primeval genes, and considers how we might attune to their ways of being on the planet.

Prior to the event, participants were asked to contribute to a collective question. The questions posed were varied, profound, full of care and urgent: Is technology evolutionary? How do we make our collective stories transparent? Can biodiversity be recreated? How can we encourage more complexity and curiosity rather than fear and control? How/where can justice and survival meet? Do plants feel pain? How do they communicate with each other? With humans? How might we listen to plants? Can they tell us how to fix this broken world? How to transform together without violence or hypocrisy? What causes imbalance in primordial energy. From these inquiries, an overarching question was created to pose to the divination cards.

How might we best connect with the world immediately around us, and what can we learn from the global pandemic? 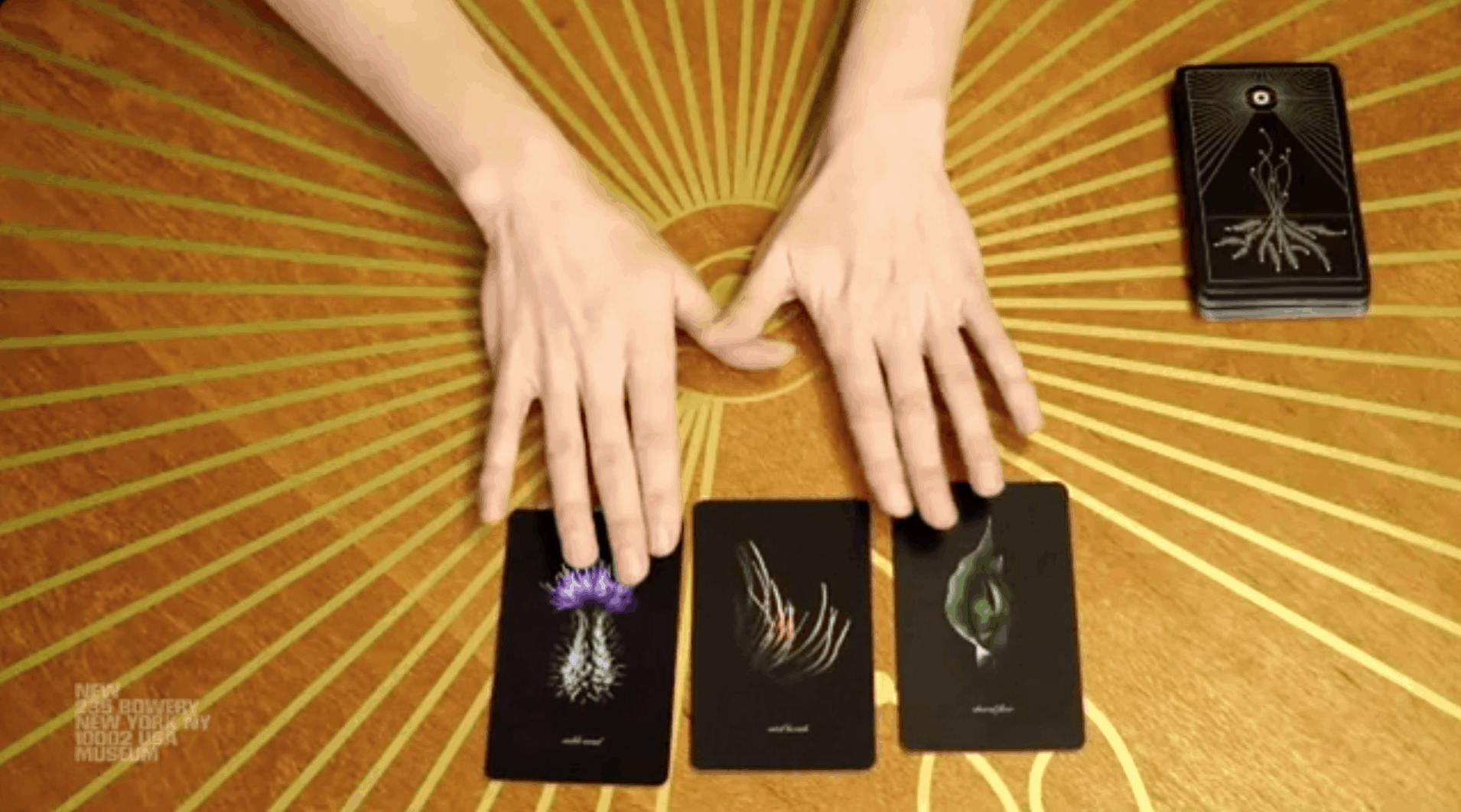 Caitlin led a card reading and the women conversed, guided by the three plants (common thistle, coastal she-oak and forest blue gum), to get to the heart of the collective question. Threads, stories and more questions arose.  A key message that surfaced is that we are not necessarily custodians or guardians of the earth, but part of a much larger patterning within which we may experience turbulence, difficulties and transformations.  When we see ourselves as patterned in, we see reminders everywhere of how to be in relation with the world – to be in a ‘shared flow’.  Listen to the wind, to ancestors. Breathe with gratitude. Might the Eucalytpus salve humanity? The full discussion can be viewed in the video above.

Following are the descriptions and images of each of the cards selected. 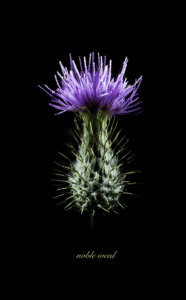 This solitary plant was found on the fringe of Karawatha Forest. To some it is considered a sign of neglect, as it thrives on fertile ground that has not been cared for. It is a prickly plant with an erect stem and purple flower head that produce wind borne seeds. To match its lengthy stem, the thistle has a taproot up to 70cm long.

‘Vulgare’ is Latin for ‘common’ and suggests something undesirable about the plant. It is designated as a noxious weed in Australia with management requiring deep cutting of the taproot prior to seed dispersal. To some, however, it is a symbol of nobility or protection and to others it is a highly nutritious food source. As the plant has spines to protect it from predators, the edible stem, leaves, and taproots, have no need for bitterness.

Is there a situation in your life in which you are experiencing neglect? Are you neglecting people or situations that you consider nourishing? Like the roots of the thistle, are you able to tap to the source of this neglect? Can you consider your situation through a different lens? You may discover a hidden purpose or a heightened awareness of a need for selfprotection. 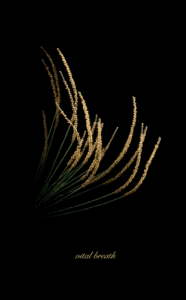 Casuarina is derived from the Malay word ‘kasuari’ (cassowary), referring to the similarity of the plants foliage to the bird’s feathers. ‘Littoralis’ is latin for ‘of the shore’ and whilst this tree is found along the coast, it also grows well in dry forests such as Karawatha Forest. In fact, ‘Karawatha’ is an Aboriginal word meaning ‘place of pines’ and it is thought that the pine-like Allocasurina littoralis influenced this place naming.

The black sheoak is dioecious, meaning male and female flowers grow on separate plants. In the winter months the male trees turn gold when laden with pollen and female trees bear conelike fruit after small red flowers. Wind, the vital force that we cannot see, plays a crucial role in pollination. Wind is related to air, breath, and spirit; that which moves, surrounds, and pervades. The whistling of the wind through the fronds are considered by Australian indigenous people as voices of ancestors and spirits around us.

Fallen needle leaves produce a thick mulch which inhibits other plants growing underneath. They are soil stabilisers with extensive root systems and root nodules housing bacteria that converts atmospheric nitrogen to nitrate which acts as a fertiliser. 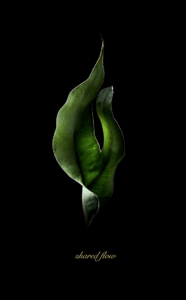 Leaves are the chief food producing organ of vascular plants, converting light and carbon dioxide into life sustaining carbohydrates. Gum leaves have intricate systems of netted veins that transport water and carbohydrates. This particular leaf shares a midrib, the principal vein that supports the leaf structure and function.

Eucalyptus trees draw a tremendous amount of water from the soil and the leaves play an important role in the ascent of the water and release into the atmosphere through tiny pores that open and close. This is advantageous to the plant and its surrounding environment because of its cooling effect. Eucalyptus leaves also have the ability to avoid drying out by exposing only their edges to the sun’s rays. Leaves can represent the connectedness of all beings in the universe because of their vast numbers growing from a shared source. This particular leaf’s interweaving veins also suggests relationships that are built on a strong foundation of collaboration and communication. How do you regulate your own energy in relation to your environment and others? Would your situation benefit from going with the flow or adopting gentle adjustments to better conserve your energy?

Dr. C.F. Black (Gold Coast, Australia) is an intellectual explorer and a writer. Her intellectual training includes a PhD in Law, Griffith University, her Australia, Australian Aboriginal ancestry, and travels throughout Native America and other Indigenous worlds. Her academic writing includes A Mosaic of Indigenous Legal Thought: Legendary Tales and Other Writings (Routledge, 2017). Research and travel have shaped her understanding of how to interact with plant beings and other beings on the Earth in a lawful manner. Currently, Black is developing online courses to share this knowledge with the general public. She is also an artist and short story author and is currently developing her first play: “The Assassination of the Soul of a Nation.”

Caitlin Franzmann (Brisbane, Australia) is an artist who creates installations, performances, and social practice works that focus on place-based knowledge and clairsentience. Her work has been featured in exhibitions globally, including the National Gallery of Victoria, Naarm/Melbourne; Institute of Modern Art, Brisbane; Museum of Contemporary Art, Sydney; and Kyoto Art Centre, among others. Originally trained as an urban planner, she completed her Bachelor of Fine Art at Queensland College of Art in 2012.

Amaara Raheem (Black Range, Australia) is a Sri Lankan-born, Australian-grown dance artist who lived in London for fifteen years. She is now based in both Naarm/Melbourne and regional Victoria (Black Range) and is co-making a residential hub for reparative and speculative practices that investigate the blur between life, art, and climate. Currently completing a practice-led PhD at School of Architecture and Urban Design, RMIT University, Amaara’s practice intentionally crosses cultural, spatial, disciplinary, geographic, linguistic, and cosmic borders.