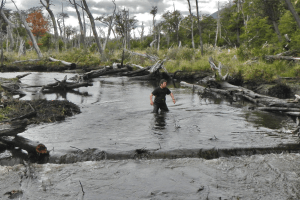 By Carla Machiavello for Seismopolite Journal of Art and Politics

On Saturday, June 7, 2014, a curious event took place at the auditorium of the National Museum of Natural History (Musée National d’Histoire Naturelle) in Paris, France. In a setting that combined a theater of operations, a courtroom and a classroom, framed by dark wooden furniture and large scale paintings of monumental and heroic looking early human communities, a group of human beings temporarily took on the roles of nonhuman animals, varied states of matter, human invented entities and subject positions, as well as concepts. Signs pinned onto the performers’ clothes read “Dead trees”, “philosopher”, “useless work”, “hunter”, “food”, “State”, “sheep”, “dogs”, “scientists”, “artists” (materials interpreted by a group of biologists, philosophers, anthropologists, dancers, artists, historians, curators, and children).[i] Under the direction of a sociologist inhabiting a beaver’s costume (an allusion to the performance’s title, “Dans la peau du castor”), the group enacted in a spontaneous manner constellations of relations (“family” connections) among the beings and ideas they represented by joining others in temporary assemblages. Shifting at least twice during the course of the activity, the relations among the actors-beings were anything but stable: as a particular configuration was built, multiple dialogues, attractions and rejections took place, and positions were rethought and reconfigured (I happened to be the “hunter” and was constantly rejected by animals, humans, and even the sun! alike, left to lurk around the other beings). Instead of a master class, lecture, or exposition, playacting took over the auditorium as a rehearsal of possible responses and exchanges between beings, ecosystems and materials. It was an exercise in becoming other, a self-conscious fiction performed by humans who were trying to think beyond purely anthropocentric terms about their relations with animals, foliage, moss, light, minerals, among other beings.

Continue to Seismopolite.com to read the rest of the article